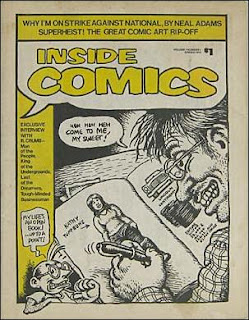 Got some great books over the river after school including X-MEN # 7 and AMAZING ADVENTURES # 1. The best thing, though, was INSIDE COMICS which showed up on the newsstand even though it was supposedly a private publication.

I also got a monster book I ordered some time ago through school.

NOTES: INSIDE COMICS was similar to the later version of THE COMICS JOURNAL with a serious but somewhat elitist attitude toward the comic book industry. It was spun-off from a feature in the newspaper, THE MONSTER TIMES and was the brainchild of Joe Brancatelli. It ran only four controversial issues. In recent years, Mr. Brancatelli has become a respected travel writer. I contacted him a couple of years back via the Internet to let him know how much I enjoyed his publications way back then.
Posted by Booksteve at 12:22 AM