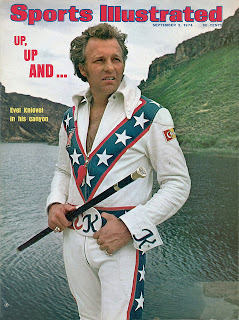 I got up to see nothing in particular but I watched the Red Baron cartoon.

This morning at King Kwik I got SPORTS ILLUSTRATED with a  beautiful Evel Knievel cover. On TV, I watched his last jump on videotape from two weeks ago. I hope he makes it. I'm certain that if anyone can, he will. Doug told me the other day there's an Evel Knievel newspaper out. Fifty cents.

I went over the river and got at Fountain all the new books and all the ones I missed last week except the Marvel Calendar. That girl was there all by herself. I had to pay her and I realized that she isn't really as attractive as I'd been thinking. And yet...after I left that feeling came back again.

Later this afternoon, I went with Terry to that store I found up at 20th. I got most of the books that I had picked out. They were right where I had left them Thursday.

Then we met Dad in Cincinnati and saw CALIFORNIA SPLIT. I was right. It was better than HOMEBODIES but they could've done more with the ending.

Some girl at the bus terminal eyed me as she walked past. Then she put her lips together all puckered like she was kissing. Wonder what that was all about. Weird.

I saw THE AVCO HOUR OF STARS but Phil Donahue wasn't in it. Oh, well. At leas, I saw the Fair again.

I'm praying that this school year will be different. Everything around me is different The setting, most of the people. The other day I saw a guy and a gal kissing in school! In the hall! And all the girls are so much prettier and grown up. Only the guys (most of them) remain slobs. But I'm passed by, of course. Perhaps I'm being spared for some greater purpose. I hope it can top what I'm missing now.

NOTES: Slowly I would come to the realization that it wasn't Evel himself I liked but George Hamilton's portrayal of him from the 1971 movie! Evel turned out to be not only a schmuck but possibly more than a little crazy...and not in a good way.
Posted by Booksteve at 12:30 AM

I had the opportunity (given the man behind the legend, "honor" or "privilege" might be a little strong) to meet Evel several years ago, about a year before he passed. He was signing autographs at a local motorcycle shop to benefit the victims of Katrina (and himself, I'm sure). I had him sign a photo for my son and the back of a comic book with an ad for the Evel Knievel stunt cycle. You can say what you will about the man, but shaking hands with the legend is an experience I won't forget.