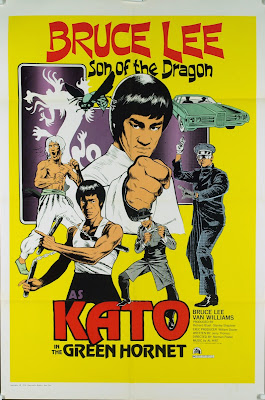 The last day of school! Well, for four days anyway.

We were able to forego English class in English class and instead discuss certain student's love lifes. Lives? We had a part of a game in History but tests in Geometry and Science. Boredom in Study Hall was followed by a canceled quiz in Spanish due to the teacher having visitors. So instead I just sat and listened to Colleen's dirty jokes like everyone else.

After school, I went straight over the river and saw THE GREEN HORNET. The continuity was non-existent as three half hour shows and one cartoon (The Dogfather) were shown.

Dad took Mom to and from work today.

We've got a turkey and pies for tomorrow.

Not too much on TV tonight. I saw a little bit of GODSPELL and then watched Rod Serling and Dick Clark on a special MERV about live TV.

NOTES: I have no recollection of a "Colleen" in my class.

The Dogfather was featured in a late theatrical series of cartoons made by Depatie-Freleng, the folks who made the Pink Panther cartoons. They started this series in '74 so this must have been one of the first ones. They popped up off and on through '76.

This was most likely the first time I saw any part of GODSPELL. Despite my not being a Christian, I've always enjoyed the movie and its songs. What I had no way of knowing then was that I would one day interview one of its assistant directors as he went on to direct Christa Helm's only starring feature. I also spoke on the phone with one of the producers of the original Broadway version of GODSPELL.