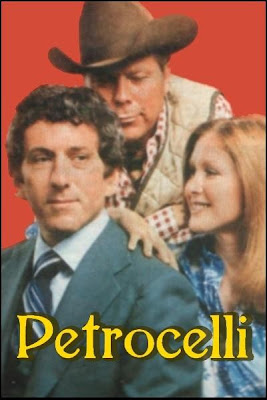 Mr. K was absent today. In club period, my class had to go to Study Hall. No teacher at all.

My horoscope said something about not hiding romantic feelings today. Coming home, I missed my bus. Doug's sister sat with me on the second one. I overheard Vernon say something that made me think that's all it meant.

I picked up a lot of stuff for my collage but forgot the poster paper.

Tonight I saw Marvin Hamlisch on a Danny Thomas TV special but had to miss Steffie on PETROCELLI.

NOTES: PETROCELLI was a two season TV series starring Barry Newman, star of such minor cult hits as VANISHING POINT and FEAR IS THE KEY, as a married lawyer. The great character actor Albert Salmi, himself tragically involved in a murder-suicide a few years later, co-starred.
Posted by Booksteve at 12:30 AM