Introduction or Who Says You Can't Go Back in Time? 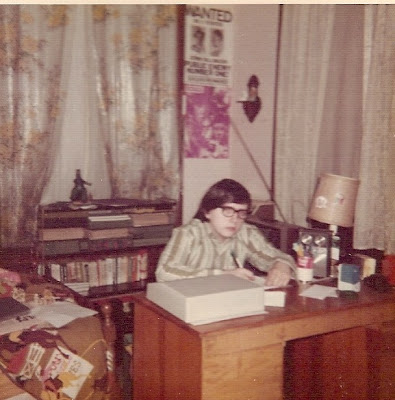 In December of 2010, I came across a box with a couple of journals I had kept in high school in the 1970’s. I thought it might be interesting to read them and see how far I’d come.
But I hadn’t really. I’m a blogger. I have multiple blogs and I write about movies and TV shows and celebrities and comic books and cartoons. And that’s exactly what I was writing about in my journals way back in the mid-seventies! Once a geek, always a geek, I guess. My 1976 journal read like a 1976 blog by me might have read.
So I thought…why not? Make it an actual blog. My Net friends all said it was a lame idea. Even though I started work on it in mid-December, I nearly dropped the whole idea right at the last minute. But I didn’t. A GEEK’S JOURNAL 1976 went up on January 1st of 2011 and ran daily through December 31st…just like my journal.
And here’s the thing. People related. People from literally all over the globe related to poor, lonely, geeky seventeen year old ME! AOL spotlighted the blog early on. BOING-BOING recommended it in mid-year. It was written up in a UK computer magazine, the local newspapers and reviewed on dozens of blogs in many different languages.
And outside of the inevitable few snarky comments, people all over the world somehow really did relate! I was flabbergasted!
For me, revisiting my earlier self with his hormonal issues and pop culture obsessions was educational but more to the point was learning that I really had NOT been as alone as I thought I was.
As the year came to a conclusion, the question came up---“What next?” I didn’t keep a journal in 1977. The only other journal I had was actually from earlier—my very first journal from when I was in the ninth grade.  So I asked on Facebook. Would anyone be interested in more of the same as a prequel? The answer was a resounding YES with much more enthusiasm than I could have expected!
So now, starting tomorrow, we return to those halcyon, pre-disco days of 1974, when I was 15 and even more awkward!  Thanks for all of your support. I hope you won’t be disappointed as tomorrow we once again time travel back to revisit unsuspecting teenage me!
Posted by Booksteve at 3:00 PM

Can't wait! I was in 5th/6th grade in 1974, so I am really looking forward to those pop-culture memories to come a'rollin' back in.

And I had that same shirt! (Sears?)

Happy New Year, Booksteve! I came across your 1976 diary/blog late in the
series, have been enjoying reading it quite a bit! Like the Groovy Agent above, I was also in the same grade(s) during 1974--I suspect you will probably cover a lot of the same stuff I enjoyed during that period that I've forgetten about!

YEAH!!! I have been enjoying your "GEEK'S JOURNAL" since Jan 1st of 2011!!! THANK YOU for continuing! We are of the same "generation" so a LOT of your TV and pop culture references bring it all back! I look forward to reading more!!!

OMG! I have stumbled onto your two blogs by accident. They are wonderful. Don't ever take them down. I remember some of these experiences, but only about two or three years ealier than you. I was at college starting in 1974 and remember the snows of 1976 as well.
I had given up comics while away at school, but love the fact that you actually KEPT a journal. Better than I ever did.