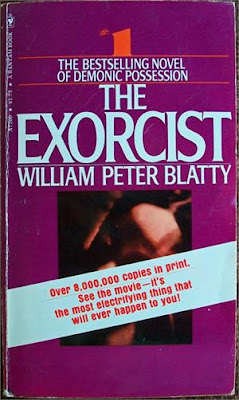 I got the novel of the EXORCIST today along with a new scrapbook.

Today wasn't so bad at school and tonight I enjoyed the new version of DRACULA.

NOTES: The new version of DRACULA that premiered tonight was the TV movie from former DARK SHADOWS producer, Dan Curtis, and starred Jack Palance. Seemed like odd casting to many at the time as Palance was a "big lug" type not known for his subtle performances. But he pulled it off amazingly well, though, in fact being credited with one of the better interpretations at a time when everyone seemed to be making a Dracula movie.


I had been making scrapbooks of movie ads and other clippings since mid-1972. I continued to do so until the early eighties. At that time, I had 28 of them and they were impossible to store or find anything in...so I tore them apart and kept only a box of selected items. Wish now I'd kept them.


I was infatuated with Linda Blair so I figured I should at least read the book if I couldn't yet see the picture. So I read THE EXORCIST and loved it! But that's probably what led to my not liking the film as much as I might have by the time I finally saw it.
Posted by Booksteve at 12:06 AM

I too saw and greatly enjoyed the Jack Palance "Dracula" when it came on. I remember writing to a friend and telling him all about it. I was happy to find it on DVD recently.

Like you, I saved a lot of clippings, which I still have... but not as many as you did! I am sorry you tossed so many as well.. what a rich mine for blogging now they would furnish. One of the houses we rented in 1974 had an attic FULL of newspapers going back a decade or more, and while I was there I mined a great deal of mivie ads and genre articles, but there were so many more I didn't have time to get. How I wish I could have, my movie ad blog would be so much better.