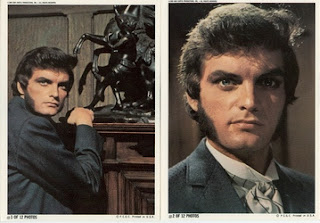 Over in Cincinnati, I got some new books and two old (and cheap!) Vampi's. Should be some more books out later this week.

I might go see McQ Sunday at Ludlow. Probably make ALICE on Friday.

I need to get a new scrapbook soon. Think I'll dedicate it to DARK SHADOWS so I can look at all my DS stuff.

NOTES: McQ was the movie that was John Wayne's version of DIRTY HARRY.


I can't recall exactly what the plot of my story was to be but I never wrote it. Just lots of notes and drawings. In my mind, Mister Alexander Cheshire, always drawn in a top hat,  looked like Willy Wonka but, as stated here, I originally based him on David Selby's sideburned DS character, the show's original werewolf, the brooding, dark-eyed Quentin Collins.
Posted by Booksteve at 12:00 AM