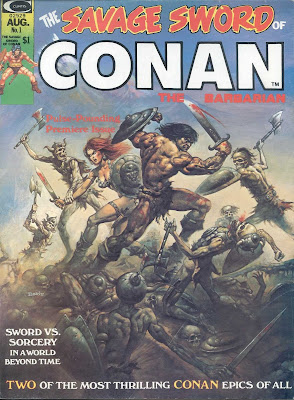 The paper once again lists The Madison for THE EXORCIST. Just another week.

It may be just an idle thought but I think I'd like to be an actor.

I got the new SAVAGE SWORD OF CONAN.

Saw a TV commercial for DEADLY WEAPONS. Seems "Chesty Morgan" is not just the character bit the actress!

IT twice today. Wish it would just stop.

NOTES: In time, my wanting to be an actor modified a bit. I wanted to be a voice actor! It's never really happened. I have been able to indulge the fantasy by performing with pros and talented amateurs onstage at the Old Time radio Convention since the late eighties. When I was working at the Public Library, I was tapped to narrate a segment on canine visits for kids. The interesting part was that I recorded the narration about a week before the event. Then scenes from the event were edited together to match my narration! Not exactly acting but fun.


SAVAGE SWORD OF CONAN was Marvel's black and white, more adult version of the Conan character. Most issues were epic length tales written by Roy Thomas with an eye toward the overall continuity and timeline of the character. Drawn by John Buscema, Ernie Chan and other illustrators who were really given their head and allowed to run with it, these were well-done stories! BUT...in the long run, they were a bit repetitive and my enthusiasm for the title wore off. On this day, though, it was the very first issue that I bought. Bolstered by the Ah-nold film adaptations, the title overstayed its welcome by running into the mid-1990's!
Posted by Booksteve at 12:30 AM