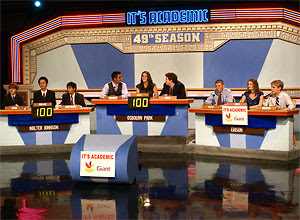 IT. It'll probably happen again, I guess, but not as often I bet.

We had lots of car troubles. Might get it back from the garage by Monday.

I got two more PEANUTS books.

Saw several folks I know from school on TV's IT'S ACADEMIC as my beloved school barely blew it.

I saw THEATRE OF BLOOD again.

Terry said they called to tell him the STAR TREK thing was postponed for another couple of weeks.

Tomorrow, I hope to catch up on a lot of work.

Was up early this morning with a sore throat so bad I couldn't get back to sleep. It didn't get much better the rest of the day.

NOTES: For the umpteenth time, the past imitates the present or the other way around, I suppose.  IT'S ACADEMIC was a long-running TV game show featuring regional series with teams made up of students from local high schools. I had wanted to be on our school's team. That was the one thing I really wanted that year but for reasons lost to time I was passed over. Can't recall who was on it at this point. Now, in 2012, there's no longer a TV show but the competition still exists and my son is, according to the team sponsor who we met this evening at the parent/teacher conferences, one of its shining stars! After NO wins last year, they are two for two so far this year.

Actually, IT'S ACADEMIC has a more interesting history than I thought. See here: http://www.itsacademicquizshow.com/history/

that show is still on in Baltimore. i catch it sometimes. i too tried out for my school's team in high school but the questions were too hard for me plus i get nervous in front of strangers.