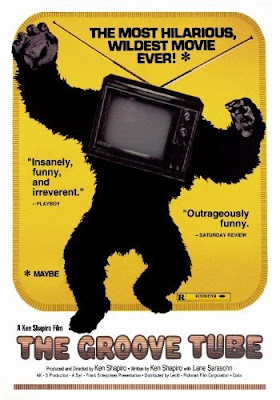 Mr. Rodgers was still absent and I was almost late for Study Hall. The Coach was out, too, and I almost got out of Gym but he decided to come in by fifth period. Boy! The highlight of the day was Part Two of RED BADGE.

I almost purposely missed the bus so I could talk to the girl who works at the theater.  After waiting in the snow for a while with her, I got up the courage to say something and asked her if she still worked at The Madison. I think she was afraid I'd ask her to get me in free. Guess she gets that a lot. I just wanted to know what was coming in January. THE GROOVE TUBE, she said. Bleeeh! It goest off today at The Place after playing there 5 months! When we finally got on a bus, i sat near her but we never spoke another word.

We got a late start at work and ended up with a lot to take out. Mom and Dad even missed Christmas shows they had wanted to see. I got back just in time to catch a special holiday episode of HAPPY DAYS. And it was really something, too!

I got twelve more giant binders they threw out at work. I think I'm going to have to get rid of some.

Late tonight i watched THIS IS THE WEST THAT WAS with Ben Murphy recreating his Kid Curry character and also Wild Bill Hickok.

NOTES: I have no idea what I meant by that last remark as IMDB doesn't list Kid Curry as a character and Murphy plays Hickok. His ALIAS SMITH AND JONES co-star narrates. I have absolutely no memory of this TV movie from the roy Huggins stable but it seems to be a deconstruction of Western myths. A good cast but totally forgotten.

THE GROOVE TUBE seemed under the radar at the time, a cult comedy edited together from early uncensored closed circuit TV comedy shown in a club in New York City. Appearing were a couple of faces who would become more familiar later--Chevy Chase and Richard Belzer. Ir would be another decade before I finally saw it and I wasn't impressed. It was more shocking than funny and by that point, KENTUCKY FRIED MOVIE, AIRPLANE, SATURDAY NIGHT LIVE and NATIONAL LAMPOON'S ANIMAL HOUSE had come along, all an outgrowth of THE GROOVE TUBE in a way (whether or nit I realized that at the time) only they were, at least sometimes, actually funny as well as outrageous.

The 12/17/1974 episode of Happy Days was "Guess Who's Coming to Christmas" and is one of my favorites. A very nice, underplayed performance by Henry Winkler, unlike the later over-the-top incarnation of Fonzie. The episode is available from a variety of sources. CBS carries it on their site. http://www.cbs.com/classics/happy_days/video/?pid=QaCcmXnfiO1N