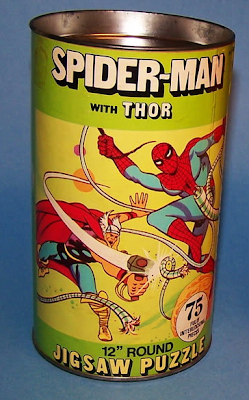 I shaved, bathed and dressed really neat before we went out to Aunt Velma's. They'll all be moved soon. I took some pics with my camera and some with Mom's. All of those messed up. Everybody kept talking about how tall I'd gotten. I got two shorts, two sweaters, a wallet and a jigsaw puzzle. Never really liked puzzles like this but it's only 75 pieces and has a cool illustration of Spidey and Thor so that was my favorite gift from out there.

I ate a lot of ham here at home and even ate a lot out there for a change. My stomach hurt really badly for most of the day, though.

Mom and Dad did SS for me as I was too sick to be of much help.

NOTES: LUCAS TANNER was a short-lived show about a school teacher starring David Hartman, soon to become the host of GOOD MORNING AMERICA.

I always preferred ham for Christmas and turkey for Thanksgiving. Over the years, especially after marrying a Jewish girl, we did away with the ham.

Normally I didn't--and still don't--eat at gatherings, whether it be a Christmas get-together or a comic book con. That way I can make sure my still unpredictable stomach issues don't ruin my day...which happened far too often back in the day.

Wishing a  Merry Christmas to all of you who have followed 15 year old me through 1974. As 2012 ends, so does this blog, and since '74 was nowhere near as popular as '76, the concept will die there as well. I may leave the two blogs online for a bit or I may just take them down. It's been a fun ride revisiting my past and taking all of you with me. More farewells in a week.
Posted by Booksteve at 12:30 AM

I have enjoyed your entries--I read them each morning while I have my coffee. I was a child of the 70s myself--started kindergarten in 1970, graduated high school in 1983. This blog and your '76 one had me reliving some very fun times in my life.

Thank you so much for sharing your memories. Wishing you and your family a wonderful holiday season and all the best in 2013! :)

Of course it's your decision to take these down, but I hope you decide to leave them up. I've followed you day to day in 1974/2012, but last year I didn't discover 1976 until half way through. I'm sure there are others out there who haven't discovered these yet.

I've enjoyed reading these as they've triggered memories of things I had completely forgotten.

I'm sorry to see the end to another year of great journal entries. It's been as wonderful a ride as your 1976 journal was. Each day I found something to relate to. It's been refreshing to read about someone who's so much like me I'd think we were the same person. Being able to read through your entries made me realize I wasn't the only one with problems of fitting in and understanding people while growing up.

I want you to know that your efforts have been very appreciated. While I'm saddened that this blog is ending I'm happy to be able to follow you through your other excellent ones. I always check out Days of Adventure after reading this one.

Thank you again for taking us on another incredible journey!

I've only just discovered both of the blogs, so please don't take them down!

The last of the 3 episodes of Lucas Tanner I had available was the one you mentioned here "Merry Gentleman", very sad, great performances by Hartman and Barry Sullivan. Surprise early appearances by Dee Wallace Stone and Janice Pennington (I will bet that I did watch her appear on The Price is Right at that time)!