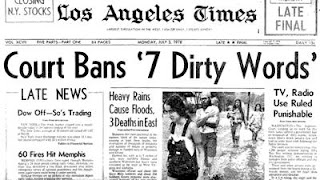 My dreams were shattered this evening when the paper noted that NO ONE under the age of 18 will be admitted to THE EXORCIST even with a parent! They can't do that!! It just isn't fair but I swear I will see it someday! Even if I have to wait three years 'til I'm 18 and it's re-released! BOY! Darn it!!

At least tomorrow I should be able to pick up the SUPERMAN Book and maybe some old comics. Terry picked up $70.00 worth!

NOTES: I don't recall if I was mis-reading that or if they legitimately chose to consider THE EXORCIST as if it were an X-rated film. I clearly wasn't happy about what I thought it said anyway. I mean "Boy!" and "Darn it!!" Wow.


My parents didn't really curse to speak of.  Ever. The one exception was that my Dad referred to anything he didn't like as "horseshit." No "hells," no "damns"and certainly nothing more colorful.  Thus I grew up NOT cursing.


A year earlier was when George Carlin ran afoul of the law with his SEVEN DIRTY WORDS sketch. It was that sketch that eventually convinced me that words are just words. It's the way one uses them that gives them power.


The first time I heard "bitch" was when Dexter P. called our third grade teacher that through a window after he walked out of class for reasons long forgotten. The first time I heard "suck my dick" was from an apparently very confused girl in the 4th grade named Susan. The first time I SAID "hell" was in the 7th grade when we were reading a Herman Wouk story and, as the best reader in class, I was chosen to read a segment aloud. I would be 23 before I said the dreaded "F" word when it turned up in a comedy sketch written by another member of the comedy troupe I was in.


Today, I know all the words and creative ways to use them. They no longer scare me but I choose not to use them unless I particularly want or need to emphasize something. Makes 'em more powerful that way.

For $70 in 1974, Terry could have picked up some key issues that are worth thousands. Did he hang on to his collection, or did he end up selling them before realizing a significant profit?

I guarantee they weren't key issues as all they ever seemed to get in were fair-good copies of more obscure stuff from the late forties. It was great, mind you, but I never saw anything there I wish I had bought because it went up so much in the years since.

That said, Terry says he still has a lot of the stuff from those days in storage but he's not sure what because he did sell quite a bit from time to time over the years.