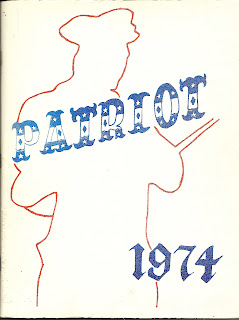 I GOT Monday's strip! Great! Got it from Mrs. P.

I got THE PATRIOT and had two signers. I signed less than 10 myself. It's not half as good as either of its forerunners, though.

Debbie Ryland talked to me this morning and I mean, like, it REALLY made my day.

I will definitely see one flick tomorrow and possibly two more. Mom got me free passes for the Newport Cinemas but they're only good if I go tomorrow afternoon.  We'll see.

NOTES: Well, what do you know? Two signatures. One reason I didn't remember them is that I don't even recall one of the signers. The other was another nerd that I had hung out with in 7th grade but somewhere along the way, he became cool. Within the next year or so he had a girlfriend and a van! We didn't hang out at all beyond this point as we obviously had nothing in common anymore. He actually signed it twice--once in pencil and then in en right under it.


Debbie Ryland was an ultra-cute girl who had been in my class off and on since about the fourth grade. Her big brother was a bully but he was a year ahead of us so was no longer at this school. She had rarely given me the time of day before in all the time I'd known her.  I really do recall that walking on air feeling from talking with her today but have no recollection of the circumstances that led to that conversation.
Posted by Booksteve at 12:30 AM

What was it about those last days of school that brought about changes of heart in even our worst enemies? I recall a boy in 4th grade who had never been anything but a bully getting misty-eyed with me and shaking my hand. Of course, that was the year they split our elementary school district and sent him and half of my class to another school.