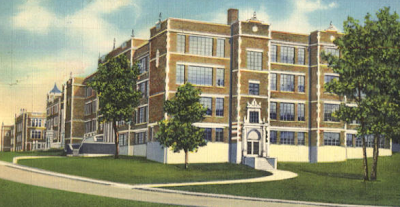 Another big day. I would've flunked the Algebra test if Mr. Gamble hadn't said he wanted to talk to me about it more. I'll get to take it again. I actually brought my Algebra book home to study. First time this school year I think.

It was terribly hot today.

We went up to Holmes. Man, it's a big place! I don't think I'd mind going there if it wasn't for the fact that everyone else in my class will be going there, too. I picked up two copies of the Holmes newspaper while we were up there. Go to sit right behind Cheryl. Wish I had a chance with her.

Tomorrow's Honor Day. I don't expect to get any awards but I'd love to get that one for highest scholastic average.

Mr. Blanchard was absent and so didn't get to see my poem yet. Didn't get to rewrite my story either other than just starting it.

I still haven't made up the Blue Book Test. I haven't even mentioned it.

Tonight I watched my favorite Gidget flick again, the one with Karen Valentine.

NOTES: So today was my first ever day at Holmes High School...even if it was just visiting. I was up there this past Wednesday in 2012 picking up my son.


No idea (again) what this Blue Book Test was.

Where you had to fill it with an essay?

Sure fits the bill. Still doesn't seem the least familiar but I'd bet that was it.