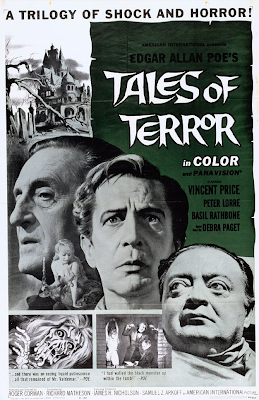 If today was too long, today more than made up for that by being very, very short.

Mr. Hubble was out today. Geometry books are finally in. I'll get mine tomorrow.

Coming home on the bus today, I got to sit next to Sarah Munday. Oh, she is SO attractive! But she hates me. And if she doesn't, she would if she knew me.They all do. I would have loved to have just leaned over on her shoulder like Ron and Kate were doing a couple of seats behind us.

Doug says Josette's pregnant! A likely story but I suppose it IS possible!

I saw TALES OF TERROR again with Price, Poe and Rathbone.

My cold was much better today but still evident. I developed an earache, too.

At work, I got two more folder, at least 20 more perfectly good pens and pencils, three more Donna Fargo albums and a wall map of Louisville. All thrown out by them!

So what can be expected for the last day of September, huh?

NOTES: Donna Fargo used to host a 5 minute daily radio show sponsored by Social Security in the seventies. Basically she would introduce a classic country song and talk very briefly about the performer before and, if time, after. Then there would be a plug for Social Security. I don't even think it aired in the Cincinnati market but since I was working as a janitor at the Social Security office at the time, they would get in box sets of albums monthly that featured all of the episodes and were supposed to be given to the radio stations. They threw them out, still sealed. Needless to say, I took them home and had a big set of them for years. Wasn't much call for rare Donna Fargo
though, but I did sell them eventually.

As 2102 imitates 1974 yet again, the above paragraph was written by me yesterday in a comment on FB to artist Carol Tyler after she had posted a clip of Donna Fargo, a singer I hadn't heard mentioned in years.

Josette was a girl Doug had gone out with a few times. I don't think there was any fear that he was the father if she was, in fact, pregnant.

Sarah was someone I had secretly crushed on since kindergarten...literally. Ron and Kate married out of high school but have long since divorced.

TALES OF TERROR was Roger Corman and Richard Matheson's multi-story Edgar Allen Poe adaptation from about a decade earlier which also starred, along with Vincent Price and Basil Rathbone, the great Peter Lorre.
Posted by Booksteve at 12:30 AM