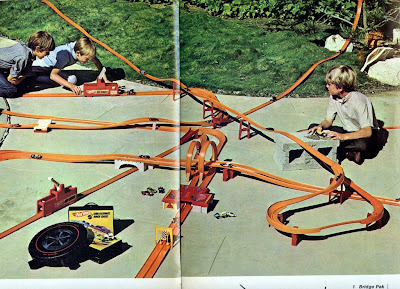 IT. It'll probably happen again, too, but hopefully not as often as it did.

Later, Terry came over and we recorded a radio show. Not as good as some we've done but it had its moments. He said he'd go with me to see the Beatles film tomorrow if we could race in the morning. HOT WHEELS!

I got a neat Raquel article out of a detective mag I got at King Kwik.

Mom got me my new scrapbook and I immediately dedicated it to STAR TREK.

Had a bad headache all day.

NOTES: I had pretty much lost interest in Hot Wheels. It was too complicated to set up the track for what inevitably proved a short race.

The Raquel article was actually in an issue of THE POLICE GAZETTE.