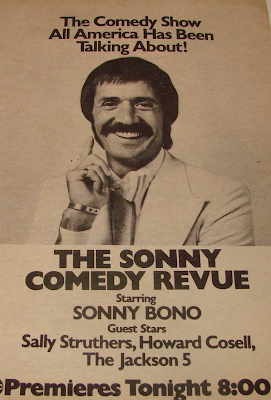 A bad day. I paid terry 8 bucks for his two Marie Osmond albums and I didn't like them as much as I expected to.

Then we went out to Ludlow to see ONE MILLION YEARS BC. It was on with the Sinbad flick. I stayed to see some of it but not much. Having already seen it, I left, leaving Terry to catch the bus. I walked all the way home. I had two Cokes before I left and my stomach was hurting terribly. I'm never gonna do THAT again!

Back home tonight, 007 was on with THUNDERBALL as was Sonny (sans Cher). I saw THE MALTESE FALCON, also. It was really good!

DEATH WISH is coming to the Ludlow.

NOTES: Another memory lapse on my part. Looks like we DID go to see Raquel but I didn't stay. Sounds more like my chronic gastrointestinal issues more than any particular desire to NOT see the film(s) again.

The Marie Osmond albums in question were her first two. They were more than "a little bit" country. They were SO country that I didn't really care for them.

When Sonny and Cher divorced, their hit TV series disappeared immediately. Sonny was given a one-hour variety show with emphasis on comedy. Cher would later debut her high-profile version with emphasis on music. Ultimately, both would disappoint and the two would eventually reunite creatively and revive their joint show. America wasn't buying it, though.

And yes, I believe this was my very first time seeing THE MALTESE FALCON, one of my all-time favorite films.
Posted by Booksteve at 12:30 AM