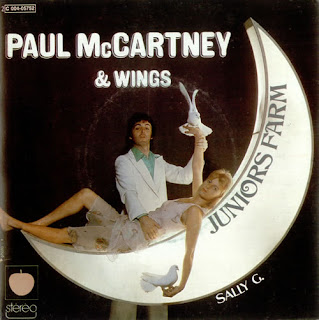 IT. Otherwise basically a good day.

I saw Erich Von Daniken on with Bob Braun and played my IN SEARCH OF ANCIENT ASTRONAUTS tape. Earlier this week, I saw an ad for the film, CHARIOTS OF THE GODS. I think I'll get his books, too. I replaced my DEATH WISH Poster with the Marvel Calendar.

Ya know...when I really stop to ponder on it, I think my all-time favorite television show might be THAT GIRL, followed somewhat closely by STAR TREK.

I didn't catch its title, but I recorded the brand new Paul McCartney single the very first time WSAI ever played it today!

Another good episode of PLANET OF THE APES tonight. They seem to be getting better but news of the series' cancellation came down already. I watched POLICEWOMAN for the first time tonight.

NOTES: Erich Von Daniken was the main one (of several) authors pushing the "ancient astronauts" theory in books and then documentary films. In some ways, it makes some sense!

I still say THAT GIRL is my favorite show, also one of the very few that I bought all the different seasons of on DVD.

I still have that recording! DJ Jim Scott played "Junior's Farm" and noted in his intro that the label only said "Paul McCartney" so Wings was undoubtedly over, "a foregone, past conclusion" as he put it! Wings, of course, set out on a mega-successful world tour the following year and lasted until the end of the decade. "Junior's Farm," however, to the best of my knowledge, was never played live until the 2012 McCartney tour!

McCartney played it in 2011 in Detroit.

Watching that Police Woman right now, "It's Only a Game"; a younger more-fro Philip Michael Thomas and Patrick Wayne who I was prolly enjoying his Marathon bar commercials around the time (pr not no far after...)

PW is the least of my favorites in this 70's cop binge, but the addition of Royster and Styles helps me through it.