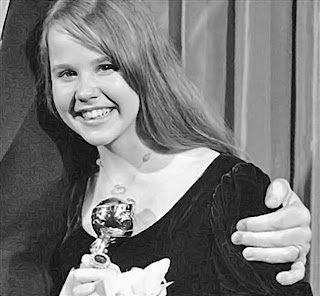 Another Sunday. I worked on my scrapbook some, watched a couple of Frankenstein movies and IT happened yet again. I went ahead and destroyed one of the mags like I said I would.

I watched the Golden Globe Awards tonight and got one of the nicest surprises I've had so far this year when Linda Blair, the lovely young actress from Warner Brothers' EXORCIST film, cried and cried when she won the Best Supporting Actress award. Afterwards I watched a late special on exorcism so I didn't get to sleep until nearly 2 AM!

NOTES: This was the first year I ever really paid any attention to the Golden Globe Awards. Since Linda won here and later lost at the Oscars, I actually preferred the GG's for the next few years.