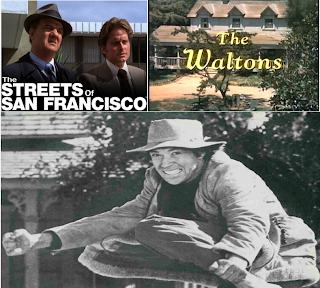 I did IT again tonight but I'm not worried. I stocked the problem away. Can't get to it anymore. And if I do, it'll be really hard to stock away like this again so I hope I don't have to worry about it.


NOTES: Whatever dirty mags I was hiding away, I seemed to be laboring under the false impression that they were what was causing the "problem." I was a 15 year old boy. I didn't need anything but hormones and imagination. I think I was trying to pass teh guilt I was feeling off on something else.


On Thursday nights in January of '74, we were consistent in that the family watched THE WALTONS. KUNG-FU and THE STREETS OF SAN FRANCISCO. All three series were above average for the seventies TV dramas.


Years later, KUNG-FU star David Carradine's death was allegedly due to an extreme form of IT.
Posted by Booksteve at 12:49 AM

>Years later, KUNG-FU star David Carradine's >death was allegedly due to an extreme form of >IT.

And here just a few days ago you wrote that IT wasn't harmful physically. Now we know better!

HA! No kidding! I've been reliving your Thursday nights for the past handful of months and loving it!

The Waltons "The Gift" Ron Howard guests after 2 episodes of the Richie Cunningham Story kicked in... Still haven't re-hydrated from the tears this episode brought.

Kung Fu "The Raiders (a.k.a. The Way of Violence Has No Mind)" Caine meets 3 Asian "Robin Hoods" with Robert Ito from Quincy.

Streets of San Francisco "Blockade" with Ida Lupino and Charles Martin Smith. 2nd show since binge-ing that Cheryl Ladd gets assaulted and killed 5 minutes in. (This show never fails...)

(**Also watched Chopper One. The guys help a pregnant teen. I don't know about this show...)