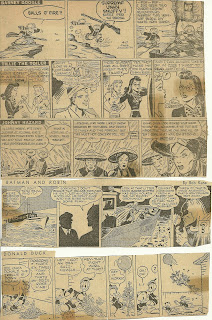 I got TBG, some new magazines, old comics and and an old (1945) newspaper today. Watched TV and talked on the phone with Terry the rest of the day.

NOTES: I still have that newspaper, still wrapped in the same plastic it was wrapped in at The Ohio Bookstore on this date. It's a Detroit newspaper from 1945 reporting extensively on the funeral of President Roosevelt. Historically important and fascinating but there was also an extensive comics section including BATMAN and JOHNNY HAZARD. As you can see from the examples seen here, though, I uh...clipped out the strips.
Posted by Booksteve at 3:11 AM