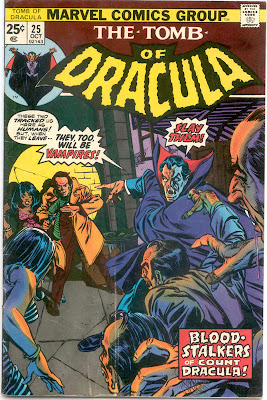 Today I had a rather engrossing day as all I did between TV and phone calls was to become deeply involved in reading every chapter of Marvel's ever-popular TOMB OF DRACULA!

NOTES: TOMB OF DRACULA was a long-running comic book series that arose in early 1972 when the Comics Code was revised to allow the use of vampires again for the first time for more than 15 years.  Originally intended as just an attempt at cashing in on the popularity of monsters, it turned out to be a  surprisingly literate series written by the appropriately named Marv Wolfman with longtime artists Gene Colan and Tom Palmer. This, in fact, became the defining book in Gene's legacy. It ran until the end of the decade and an animated version was made in Japan (of all places) in the eighties.


I had seen my first Dracula movie when I was 7--Chris Lee in DRACULA, PRINCE OF DARKNESS. By the mid-seventies, I had read extensively about them and seen a lot of the movies on TV and a few in theaters. I even went on to write my own vampire stories some thirty years before that became such a popular thing to do.
Posted by Booksteve at 12:10 AM

-Hec Ramsey (Richard Boone, a mix of westerns and forensic investigation. May be the toughest for me to follow along, not good with westerns and my copies are rough quality) "Dead Heat" The love chemistry between Jackie Cooper and Sheree North was nice, but that's most of what I got...

-the second Harry O pilot "Smile Jenny You're Dead" (also watched the first pilot "Such Dust as Dreams Are Made On" from March 1973) Has a similar feel to Rockford Files and I do like Janssen! Look forward to when the series starts. Nice appearance by young Jodie Foster too.