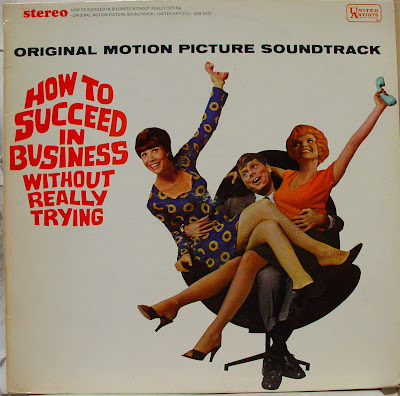 I went with Dad over to the Post Office early this morning and took some pictures along the way. He let me out downtown on the way back and I went to OBS. They've sold almost their entire collection up front.

Narrowly avoided IT later in the day but the point was I DID avoid it thanks to thinking about my horoscope. IE: "Cupid has special plans for you." I hope for once it's true.

I passed up NATIONAL LAMPOON to get Dad a Father's Day card. I'm glad I did that.

I watched HOW TO SUCCEED IN BUSINESS WITHOUT REALLY TRYING on TV.

NOTES: I still have the pics I took that day including one of my dad walking toward the Post Office (where he worked) while I sat in the car. You can see him walking away and you can also see me in the rear-view mirror holding my camera to take the photo. Of course, I couldn't find it to post here but I know I've seen it recently.


HOW TO SUCCEED... was, after CABARET, one of the few soundtrack albums I ever bought...and I picked it up used. Not a huge fan of the movie but I do enjoy the songs.


In another odd time coincidence, today in 2012 I mailed out what I believe was my last original issue of NATIONAL LAMPOON to a person who bought it from me over the Net the other day.
Posted by Booksteve at 1:00 AM