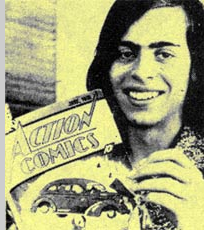 I went and got 3 burgers and then Dad got me 2 more later!

I fixed the alarm clock to wake me up at 1 AM so I could catch TOMORROW with comic collector Mitchell Mehdy, the guy who bought ACTION COMIC # 1 for $1801.26. He didn't sound to knowledgeable fan-wise but he sure had some good books there including MICKEY MOUSE'S CHRISTMAS from 1938, the only existing copy in the world! There were also a couple of fully clothed streakers as guests. Overall, it was worth the hour of sleep I lost.

I took the Coke picture, today.

NOTES: LILIAS, YOGA AND YOU was a long-running PBS yoga show based locally out of Cincinnati's WCET, Channel 48. Lilias Folan was kind of hot. Years later, she came in my store once or twice.


Mitchell Mehdy is apparently now a prominent attorney in San Diego. At the time he was ridiculed for paying so much for a comic book that used to be worth ten cents! He got tons of publicity though. In more recent times, of course, ACTION COMICS # 1 has been selling for more than a million and a half.


Wish I knew what that Mickey Mouse comic book was that he had. The closest I can find listed is a 1939 one entitled MERRY CHRISTMAS FROM MICKEY MOUSE which is listed as "Rare" but hardly the only existing copy.


I think the Coke picture was one where I tried to be artsy. I set up a cardboard background and positioned various Coke bottles around it to take a photo. I was teaching myself about design but it really didn't work out well. I don't think I have it anymore.