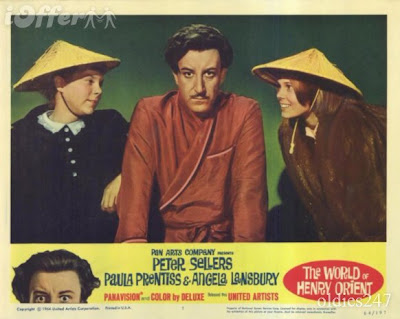 The lowest exam grade I got was a C in IPS! Otherwise I got all A's and B's.

All the girls at school today for report cards wore next to nothing! Hot pants and halter tops!

THE EXORCIST's last days have increased to 21 days. Three more weeks of waiting.

THE SUPER COPS is saying "Last 14 days."Need to catch that one.

There's a Bruce Lee triple feature at a drive-in.

I did IT rather accidentally today but still it counts as IT.

I saw a good movie on TV with a girl that kind of resembled Linda Blair--THE WORLD OF HENRY ORIENT.

NOTES: We didn't have an actual dress code that I recall in school but there were some items not permitted and those included hot pants and halter tops.  Thus my surprise to note that many of the girls I had been going through school with were...well... growing up.


THE WORLD OF HENRY ORIENT became and remains a favorite movie. Technically it stars Peter Sellers but in reality it stars two young teenage girls who become obsessed with Sellers' concert pianist and essentially become non-threatening stalkers. The actress who reminded me of Linda B was Tippy Walker (R in the picture above).