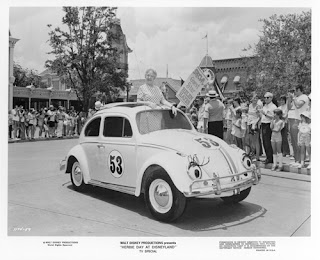 I got a letter from Dynapubs about FLASHBACK.

I made out a list of books to try to sell to someone. Not OBS.

I watched HERBIE DAY AT DISNEYLAND celebrating the Disney premiere of the new movie I hope to be seeing tomorrow. I hope to go with Doug but if not, maybe Terry.

NOTES: HERBIE DAY AT DISNEYLAND was shameless, blatant promotion but they really made  a big deal out of it. As you can see, it even had its own publicity stills!


EXORCIST director Friedkin's first theatrical feature as a director was GOOD TIMES, a surreal 1967 vehicle for Sonny and Cher. Not as bad as its reputation and, in a way, a preview of their style of humor as seen just a few years later on their hit variety series.


FLASHBACK was a series of facsimile reprints of classic Golden Age comic books that featured full color covers and murky, black and white scans of the original color pages for the interiors. They weren't great but they were all we had at the time when it came to reading complete comics from the forties without paying a lot.

Marlo Thomas' special: "Acts of Love and Other Comedies"


...and actually the Friedkin movie that played this night was "The Night They Raided Minsky's" (1968)