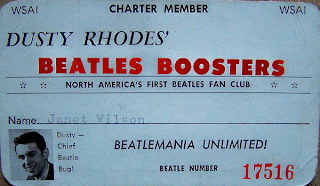 Debbie's birthday. No card or anything from me this year. Oh, well. It's been almost 5 years since she moved.

Basically a bad day although I discovered that my crush on Linda is bigger than ever. I intend to write her again tomorrow.

I heard the Beatles Top 20 hits on WSAI tonight.

NOTES: WSAI AM had been the big Cincinnati Beatles station during the early days of Beatlemania and more or less carried that reputation with it for years afterwards. DJ Dusty Rhodes was their biggest booster but he was by that point on another station. Oddly enough, he's still around. Although he became a successful politician over the years, he has almost always maintained a presence on the air locally.


Since my first ever Beatles record was the single of THE LONG AND WINDING ROAD in 1970--their very last release before the breakup--I spent most of the seventies trying to get hold of all their music--released and unreleased. By this point in 2012, I honestly think I've at least heard 90% of everything they ever did when someone had a tape recorder on. As McCartney once put it when asked his opinion of the heavily bootlegged material, there was a REASON they didn't release it. What they DID put out was the GOOD stuff.


As far as Debbie, it would be another couple of years (!) before I finally quit carrying the torch (after seeing her one last time. Check my 1976 Journal for that story). Would most likely have happened much sooner if I had ever had another girlfriend to replace her but that just never happened so I pined away from time to time when I wasn't busy fantasizing romantically about Linda Blair.


Come to think of it, today would be Debbie's birthday yet again. Wherever she is, I hope if she remembers me at all that she realizes I was just a poor, lovesick schoolboy. Happy birthday, Debbie.
Posted by Booksteve at 1:00 AM