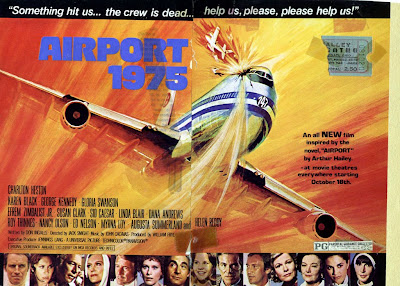 We had three fire drills today at school.

I got the Marvel ORIGINS book at Kidd's. Also some new stuff on Linda and her new movie and my first look at the AIRPORT 1975 poster. In full color yet from the TV GUIDE! Also picked up THE SPIRIT and a few other things.

Got the second issue of the school paper this morning and actually heard an episode of THE LONE RANGER on WEBN!

NOTES: This was most likely the first episode of the radio LONE RANGER that I had ever heard. More than two decades later, I would be privileged to appear in a re-creation of a LONE RANGER episode with the original announcer Fred Foy. Later that evening, my wife and I had dinner with him.

Sounds like someone was having fun with the school's fire alarms on this date in 1974. In the latest coincidence crossing the time barrier, my son came home yesterday and told us that someone was pulling the fire alarms at school in 2012!

Seen here is the original TV GUIDE ad I got on this date 38 years ago, ripped out and taped together by me and with the ticket stub from when I eventually saw the film itself later in the year!