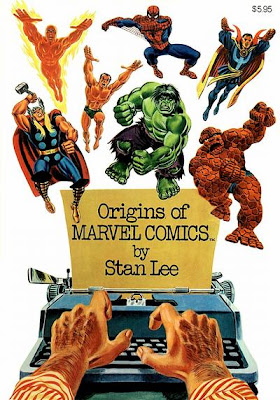 We had our pictures taken today at school, we played football again and I went home with Doug after school. He bought that Indian ring and gave me a picture of Linda that I forgot last time.

On the way to the bakery to catch the eastern home, we found an old copy of PENTHOUSE but all the good parts had been ripped out! He did spot a pic of Raquel, though, small and fully clothed.

I saw Stan "The man" Lee on TODAY talking about THE ORIGINS OF MARVEL COMICS. Kidd's should get it in soon. Maybe this week.

Watched a pretty good western movie tonight, THE GOOD GUYS AND THE BAD GUYS, with a pretty awful performance from David Carradine.

NOTES: Robert Mitchum, George Kennedy and a cast of old pros in a Burt Kennedy comedy western. Pretty forgettable, really, but enjoyable at the time.

Stan Lee's book turned out to be a lot of fun, although I now know it was filled with generalizations and inaccuracies, much like Stan himself. Hard not to like the man but he does have his own version of comics history that doesn't always fit the facts.

I actually own this book!!