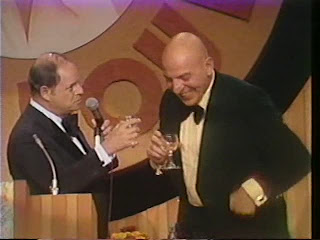 Doug was back today. He's been off sick.

Phone's still out (since yesterday).

More Apes tonight. Then I watched Dean roast Kojak. Earlier I got to see "Tomorrow is Yesterday," one of my favorite STAR TREK episodes.

I've decided to see THE STREET FIGHTER if Terry can get us in. It's not actually rated X. It seems to  be rated U.

The comic store up by Twin Fair is going out of business.

I did some checking of Erlanger on a topographic map provided by Jay. Neat!

NOTES: Dean Martin's career during this period had settled into a weekly "roast" format where he hosted an often mega-famous roster of celebs who made merciless insulting fun of each other and the "Man of the Hour." In retrospect, it was kind of weird but there was a perverse delight in seeing such legendary stars on a regular basis. About the only old-timer who never showed up--for obvious reasons I suppose--is Jerry Lewis.