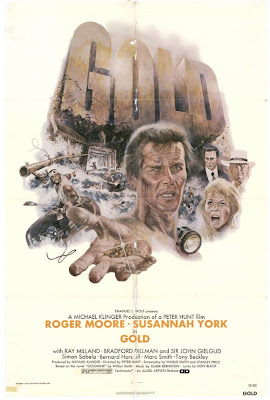 A good day at school mostly. Most people were crazy about my poster. Coming home, I planned to catch the Eastern but due to complications I ended up about freezing as I walked back to catch the Rosedale I could've caught just outside school. Boy!

We almost didn't get into the movie because the girl in hot pants said we couldn't be admitted because we should be in school. We explained it, though, and I guess she believed it because we got in. GOLD wasn't as good as Roger's other "gold" film but it wasn't bad.

Terry says we'll see that X-rated kung-fu flick this weekend. His mother's agreed to take us. In 2 weeks, Bruce Lee in KATO! That's all we know but whatever it is we aren't gonna miss THAT! Nuh-uh!

Picked up some new books and mags while we were over there.

And another thing. We were blessed with the first (tho small) snow of the season.

Watched CONQUEST OF THE PLANET OF THE APES again on TV. They also showed a 15 minute featurette that took the apes from the first movie to the TV series.

NOTES: Wish I could remember what that poster/collage was.

I don't recall much about GOLD at this point beyond the saturation TV advertising at the time. I see now it was based on a book by Wilbur Smith who would still be a big seller all through my bookstore years. GOLD was directed by Peter Hunt whose first film remains a favorite even now, 1776!

The "X-rated kung-fu flick" was Sonny Chiba's STREETFIGHTER and KATO turned out to be a few episodes of THE GREEN HORNET from 1967 badly edited together for big screen release.