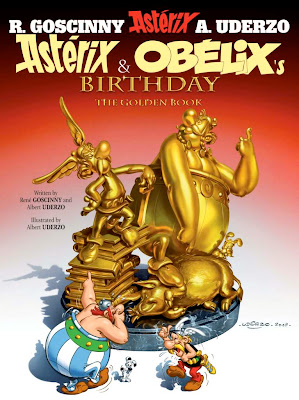 I actually managed to get on base a couple of times in Kickball, today.

Finally got the French mag at school so I now have 5 new pics of Linda! He had a French language comic with ASTERIX, too!

Since I had to catch the cab home again, I actually beat Dad home for a change. Riding cabs seemed almost routine today.

Picked up some cool old movie ads from newspapers (64-66) thrown out at SS tonight!

NOTES: I didn't realize it at the time but this was the last day I'd need the cabs to get too and from school as the buses were back by morning.

Kickball, as you may know, is baseball without a bat, using a basketball or other large ball. Like volleyball, I was sometimes unexpectedly good at it.

I often wondered why they suddenly had decade old newspapers thrown away at the office but they sure were cool. (And yes, I still have them.)

BANDOLERO was an okay western flick with a big name cast headed by Jimmy Stewart, Dean Martin and Raquel Welch. I had obviously seen it a couple of times by this point but remember nothing about it now.

ASTERIX was a French comics character I had read about and even seen a few books in English featuring him at Kidd's Book Store. In time the strip would become an absolute favorite of mine in spite of the fact that every attempt to make it successful in the US failed miserably. Internationally, the albums remain constantly in print and sell extremely well. In recent years there have even been a number of big-budget French live-action adaptations...never translated into English, of course. Most recently in the news, aging ASTERIX artist/co-creator Alberto Uderzo passed the torch to new creators who will now carry on the traditions!
Posted by Booksteve at 12:30 AM