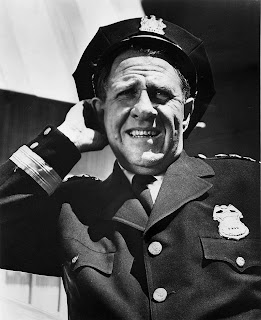 Another good Friday the 13th!

Got the new TBG and saw where BATMAN's Chief O'Hara died last week and Otto Binder died in October.

I found out in THE HOLMESPUN that I made the B Honor Roll. That was the day's only real bummer. I had expected to make the A Honor Roll.

Got about five bucks worth of stuff over the river.

I'll have to get my glasses fixed tomorrow. They're just too tight.

Maybe I should invite Debbie to see THE TOWERING INFERNO with me since it's going to be at the new cinemas near where she lives. I doubt it. I'd be afraid of being turned down.

NOTES: Friday the 13 has always brought good luck to me. Still does. Even if nothing good happens on a Friday the 13th, nothing bad does at least.

Hard to believe that five bucks worth of stuff was a LOT in those days.

Actor Stafford Repp played Chief O'Hara, a character originally unique to the TV series. Otto Binder was a longtime comic book writer known for his stories of the original Captain Marvel and later for the various Superman family of titles.

Not Debbie again. I'm so embarrassed.
Posted by Booksteve at 12:00 AM