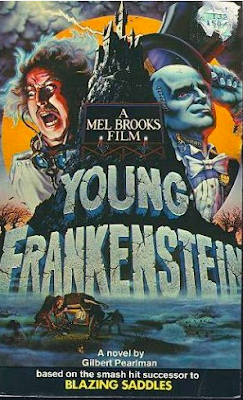 Today I did end up staying home. I felt a bit better than yesterday but my head was stopped up worse. While talking with Mom, I kept trying to think of excuses why I should stay home. I guess she knew what I was doing but she gave me the money to see the doctor. Mrs. P had called the doctor to see her husband and I was going to see him, too, while he was here only he never came. I started taking the penicillin pills he gave me last time and felt a little better so I didn't even end up going this afternoon.

This afternoon, the Dean of Boys called. I almost didn't recognize his name at first. Wanted to know where I was and sounded a bit skeptical when I told him I was sick. I felt bad because I almost feel good enough to go in by afternoon.

Finished YOUNG FRANKENSTEIN. It was funny but if the movie is like the book it would have to be rated R.

Mom hurt her ankle at work.

Mrs. P called to ask if what she was seeing across the street looked like a fire to me. It did but someone seemed to have put it out even as I watched out the windows.

NOTES: I really hadn't ever had any interaction to speak of with the Dean of Boys. That's why I hadn't recognized his name when he called. Apparently no one, myself included, had remembered to call me in sick that morning. Oops.