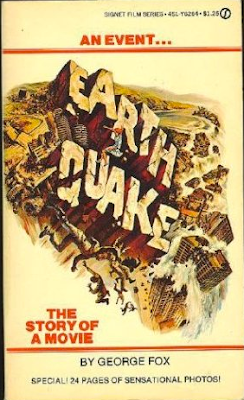 In Gym today, we played basketball and somehow I scored my first two points! A great Gym day!

We were in Lab in Spanish.

After school, I picked up my new glasses. They're a bit too tight even though he fixed 'em five times.

I picked up another paperback, EARTHQUAKE.

Terry called. he got another letter from the STAR TREK people. Seems there's another meeting this Saturday at UC. It's supposed to be about the chartering of the bus to the February Convention. Mom says I can't go but I'm still hoping to convince her.

NOTES: Note that when I was doing well in it --which was rare--Gym wasn't such a bad class after all.

During that period, I picked up a lot of novelizations, novels written based on the movie's screenplay rather than the other way around. The ones for spectacles such as EARTHQUAKE were particularly poorly done as they couldn't convey that spectacle on the printed page...especially in this case with Universal's new Sensurround feature.