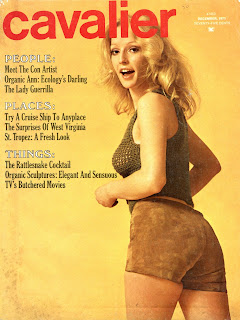 Well, today the weather is, if anything, worse. And my cold is definitely worse! The sidewalks are still slick as glass. I'm staying home again in hopes that by Monday, this will all blow over.

I did IT again, today. Twice. I think I've solved the problem though by stapling my magazines shut!


That said, I wonder what magazine this was. HUSTLER just started later in 1974 so it wasn't that and the HUSTLER ripoffs obviously wouldn't have existed yet. I had never seen a PLAYBOY by this point. Hmmm....At some point I had mail-ordered some 1971 CAVALIER mags that had comics by Berni Wrightson and Vaughn Bode. Could have been those. Or maybe NATIONAL LAMPOON. Some of those issues got awfully dirty in those days and I had definitely started buying them by '74!
Posted by Booksteve at 12:21 AM