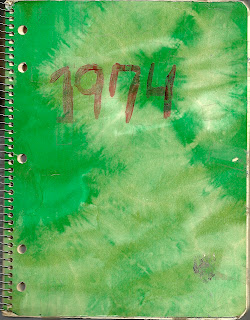 I'd like to say right now, right in the beginning here, that my one and only resolution is to do better this year than last. Not to make the same mistakes. To gain greater will power and to control my personality traits more.

As the year progresses, I hope it's exciting so that this book is not left entirely empty.

(LATER:) Today itself isn't all that interesting. I've just been putting away all the remainders of the holidays and preparing to return to normal mode tomorrow morning.

I had a dream last night and in it I hugged a girl! It was wonderful! That's what I need--affection! I know others who get it and I feel like I deserve it, too. Maybe this year...but I doubt it.

NOTES FROM 2012: As 1974 began, I was 14 years old and in the 9th grade at Covington Junior High School in Covington, Kentucky. It was the same school I had attended all my life. After I finished sixth grade, they rebuilt the school into a junior high with 7th, 8th and 9th grades and renamed it.


Other than the building itself, however, I had been quite traumatized by the switch from elementary school to what they now call middle school. There was no one thing. It was everything! The new teachers, more bullies, so many new students, the showering in gym class, the sex education classes! I had gone from enjoying school to hating it almost overnight and I hated it throughout 7th and 8th grade. In 9th grade, where we find me as 1974 begins, things had eased up quite a bit (or I had finally gotten used to them) and I was slowly sorta-kinda starting to enjoy myself again.


I lived with both parents in a huge apartment we had moved into when I was 6 and where I would end up staying until I was 32. I had collected comic books since I was 7 years old and I was very much the budding film buff. I loved television and ever since I had seen THE DICK VAN DYKE SHOW as a kid, I had wanted to be a writer.


I guess that's why I decided to try my hand at a journal.


I'm not reading too far ahead in the Journal, though. I want it to come as a surprise to me as we go along, just like it did then. Check back tomorrow when I return to school after the holiday break.
Posted by Booksteve at 12:02 AM