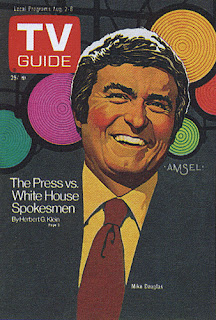 Evel made a good jump!

My deal came through with Terry so I sent most of the rest of the day reading.

The chances of my seeing THE EXORCIST tomorrow are now very slim but I'll still probably see some movie tomorrow. There's a chance Linda B might be on THE MIKE DOUGLAS SHOW tomorrow, also!

NOTES: Mike Douglas, like Merv Griffin, was an ex-big band singer turned talk show host. Unlike Griffin and Carson and most other talk shows, however, Mike prided himself on welcoming the new as well as the tried and true. He wasn't himself "hip" per se...but it was like he knew it when he saw it. I enjoyed THE MIKE DOUGLAS SHOW immensely during the seventies. In more recent years, Rosie O'Donnell has called Mike's show the biggest influence on her own talk show.


The image of Mike seen here, by Richard Amsel, was one of my all-time favorite TV GUIDE covers.
Posted by Booksteve at 12:11 AM