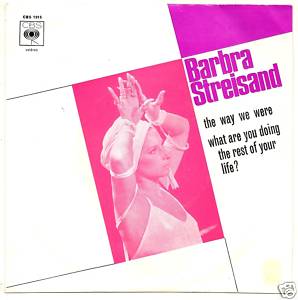 Not bad. Worked some more on my story rewrite today and had a fair day at school. The weather was beautiful all day long.

NOTES: Well, alrighty then...I swear the year gets more interesting. While we're here, let's take a look at what was topping the music charts.


Barbara Streisand, whom I first discovered with her attempt at a rock single, STONEY END, in 1971, was now back in more familiar territory with what I still feel was the best song she ever recorded--the wistful ballad, THE WAY WE WERE. The movie theme had topped the charts the last week in January and then after a   week's displacement had returned to the number one position on the 10th. This time it would stay for two weeks.


The movie THE WAY WE WERE was, by contrast, extremely dull and forgettable. The song and the recording are gorgeous!
Posted by Booksteve at 12:27 AM

I would give that "Way We Were" movie another screening. As an adult, looking back on yourself as a younger, less experienced person, being buffetted by world events, you may see deeper meaning and significance. I know I do, everytime I see it. And the music and transitional sequences are second to none. Both lead stars were superstars and at the top of their game! Don't see this one short!