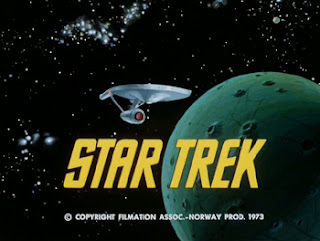 A new month. School's out. I didn't go over the river today although tomorrow I might to see a movie. I saw a Peter Sellers flick and THE SAINT on TV. Also an animated STAR TREK episode.

Narrowly avoided IT this morning.

NOTES: The animated STAR TREK premiered a year earlier with well-written scripts and most of the original series cast doing voices. The problems with it were the half hour format, extremely limited animation, the fact that the actors all recorded their performances separately --leaving no room for real interaction--and waaaay too much annoying music!!
Posted by Booksteve at 12:30 AM