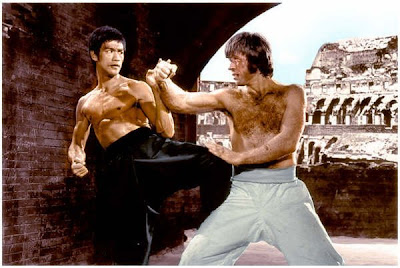 IT. I bought a new 60 cent mag for it but I expect to get rid of it soon. In fact, once school starts, I'm hoping IT will never happen again.

I got a BLACK BELT yearbook, SIXTEEN (with Linda pics), a new PEANUTS paperback and Marvel's HITLER mag.

I saw the girl at Fountain. Wish i could see her more often.

I saw RETURN OF THE DRAGON with Terry and his mother. Twice. Actually, she didn't even stay. She paid to take us in, then walked back out. Throughout the picture, everyone was cheering, yelling and applauding. Everyone loved it! It will probably make my Top Ten. I've devoted several pages in my new scrapbook to Mr. Lee now.

I gota  new stapler, too.

NOTES: Wish I still had that new stapler. Mine's missing.

In a bizarre attempt to...do something, Marvel Comics packaged and published a historical photo magazine based on Adolf Hitler. Hitler was surprisingly popular in this period with several movies related to him and John Toland's award-winning biography just a year or two away.

The folks who ran Fountain News were a family from...somewhere. I thought Mexican at first, then Greek, later Indian. Not sure. All I know is that girl was cuter than cute! She helped out from time to time and later worked the counter often which always made me feel awkward when I was buying the dirty mags.

RETURN OF THE DRAGON was actually not a sequel in any way, shape or form to ENTER THE DRAGON. In fact, it had been made first under the title WAY OF THE DRAGON. It's a minor story with its major setpiece being a duel to the death between Bruce Lee and Chuck Norris--he in his first major role--set in the Roman Colosseum.