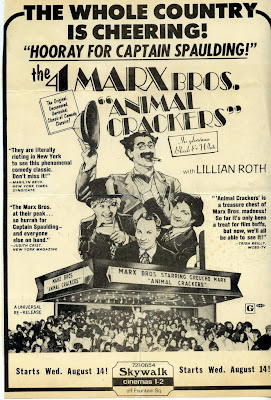 I went to see ANIMAL CRACKERS and it was really funny! Coming back I ran into Terry so I ended up not buying a new dirty mag at Fountain. Terry told me I had missed a lot of good stuff at The Ohio Book Store this morning because I didn't go.

This weekend, I hope to see a movie that's much better than BIG BAD MAMA--the unofficial sequel to my all-time favorite action flick, RETURN OF THE DRAGON with Bruce Lee!! Terry says we might get to see the other film tonight, also. I'm not staying home from work, though.

Well I cracked my previous work record again by finishing in just 23 minutes! I'm mad about one thing, though. Doug saw BIG BAD MAMA two days ago and didn't even tell me until now! I could have went with hi and he knew I wanted to see it! Terry got mad at me on the phone tonight but that's okay because I'm mad at him, too!

NOTES: As religious as his family was, I'm surprised Doug saw the controversial exploitation flick with William Shatner and Angie Dickinson (and Graham Nash's future wife, Susan Sennett!) at all.

ANIMAL CRACKERS was the 2nd Marx Brothers film from way back in 1930 that had at that time been out of circulation for decades. Steve Stoliar, now one of my FB friends, was instrumental in getting it nationally re-released to capacity crowds! As you can see from the flyer above that I picked up that day, it had been on for nearly a week already by the time I saw it. By that point, I knew three of the Brothers Marx from TV but Zeppo was new to me so he fascinated me. I kept waiting for him to be funny, though.
Posted by Booksteve at 12:30 AM