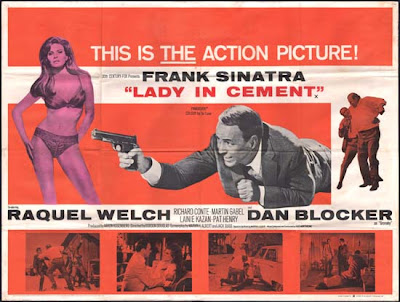 IT. I destroyed the mag already.

We went to church where I saw Janet O'Malley, the first of many familiar faces I'll see I guess as school starts up again this next week. Doug had me terribly worried this morning with a remark about school but now I'm convinced it's not so.

I intend to write Dreamsville about Linda instead of Linda herself this time.

Saw Sinatra's LADY IN CEMENT with Raquel on TV today.

NOTES: Dreamsville was a column in some magazine where they supposedly would choose a fan letter and then introduce the fan to the person they were a fan of, in this case me to Linda...I wished.

No clue what Doug had said about school or why I almost bought it.

What a terrible poster! Looks like he's shooting at her! LADY IN CEMENT was actually a pretty good sequel to Sinatra's TONY ROME.
Posted by Booksteve at 12:30 AM