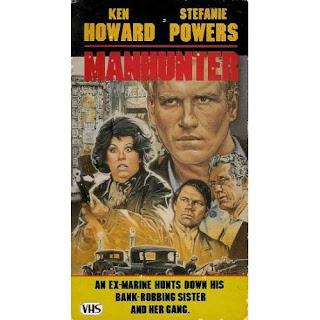 Didn't get the letters done again.

Doug came up early and we played games until about one.

So far of the two people I had going to the movie with me, I now have four. Oh, well. It's the last time.

Today I saw a Martin-Lewis picture.

Spent the afternoon re-reading all my PEANUTS strip collections.

NOTES: MANHUNTER was a short-lived TV series with Ken Howard as a Depression-era bounty hunter. Seen above is the pilot as it was eventually released on VHS. The pilot co-starred Stefanie Powers and her then-husband, Gary Lockwood.

My parents had taken me to Jerry Lewis films all my life and I knew Dean Martin from his TV variety series and records on the radio. It was only in the early seventies that I began to become aware that they had been a team. Over the next few years I would learn more and more about them and in time become a big fan of Martin and Lewis.

Earlier this year in 2012, I finally sold all of the PEANUTS books mentioned here.