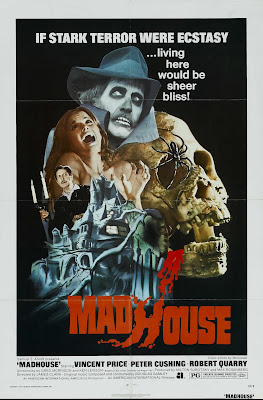 IT twice. I know I'll have it licked when school starts this next week.

Tomorrow I hope to finish rewriting those letters.

Dad promised to take me to RETURN OF THE DRAGON Saturday.

Terry's not mad at me.

MADHOUSE is on at the Twin. Ack! Too bad.

NOTES: I know, I know. Too easy. Let's just ignore that accidental double entendre above, okay? Okay. Moving on...

MADHOUSE is a Vincent Price/Peter Cushing/Robert Quarry film that looked great to me but barely played anywhere around here at all! It was cover-featured in FM and came directly on the heels of Price's well-received THEATRE OF BLOOD and yet for some reason, it didn't get booked in this area except at a drive-in way out on the other side of Cincinnati where I had no hope of seeing it. Although not well-liked by many fans, I found it quite enjoyable but that wouldn't be until I found it on VHS about two decades later!
Posted by Booksteve at 12:00 AM