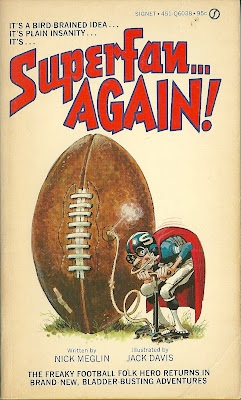 I got several more things on Linda including one that's prompted me to write her again tomorrow (maybe). I also ordered LINDA--EXORCIST & BEYOND for $7.00! What it is exactly I'll have to wait and see.

I got FATE & FORTUNE 1 to trade to Terry.

I also got SUPERFAN AGAIN which wasn't nearly as good as the memorable SUPERFAN I got a year or so back.

NOTES: Not sure what FATE & FORTUNE was. There's a magazine called that nowadays but that's clearly unrelated. Not sure what that LInd aBlair thing I ordered turned out to be but I'm shocked I paid that much for it! That was a small fortune in those days!

I DO know what SUPERFAN AGAIN was. I sold it recently in 2012 alng with SUPERFAN. They were MAD-like paperbacks by Nick Meglin and Jack Davis featuring a nebbish who gets super powers and becomes a football hero. Seen here is my original copy, scanned just prior to selling it.

When you wrote FATE & FORTUNE you were probably referring to 2 separate mags. FATE was a l-o-n-g running digest sized magazine devoted to the supernatural, UFOs, cryptozoology, ancient astronauts, etc. If you or your friends were interested in Von Daniken-type stuff, that might have been why you bought it.