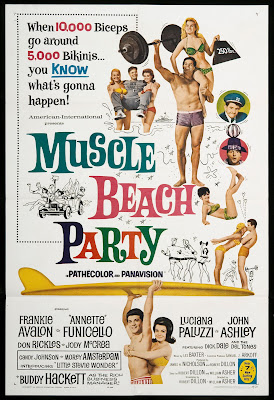 Doug has moved! he wants me to come up tomorrow or sometime soon. He tells me that girl IS Bob's sister. Oh, well. Can't win 'em all. Just wish I could win SOME of these!

I had a terrific dream about Doug, Terry and I attending some big school over in Ohio. Too fascinating to really describe and get across what made it feel so good.

Saw part 2 of THIEF and a very, very moving ABC afternoon special with Patty Duke Astin. I finally saw MELVIN PURVIS, G-MAN, too. And I watched MUSCLE BEACH PARTY again. Made me discover that what used to be my favorite type of movie now seems childish and silly. Boy! I didn't even like it!

Either I mis-numbered or I'm missing two of my SPECIAL COMIC EDITIONS.

NOTES: Not sure how Doug knew she was Bob's sister. Guess if I had a clue who Bob was maybe?

Don't recall where Doug moved to, either. Don't think I ever did go there. Guess we'll find out.

Interesting how tastes change. Seems to me like I always loved the BEACH PARTY movies with Frankie and Annette. Yes, they are silly and childish but...so? This particular one also features Donna Loren who I was privileged to interview a couple of years back, "Little" Stevie Wonder and one of Peter Lorre's very last film appearances. I loved it as a kid, apparently didn't as a teenager, and now I love it again!
Posted by Booksteve at 12:30 AM