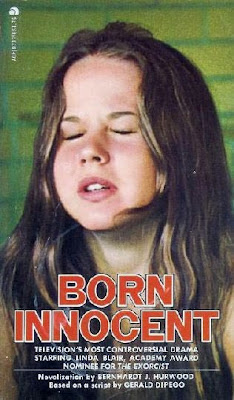 Bad school day all around. Especially Gym. That stupid teacher thinks he's an Army Sergeant!! "Attention! Count Off! About Face! At Ease," etc...Boy!

Missed the early bus but still made it home by 4.

May go back to Newport this weekend to see BANK SHOT if it doesn't open closer.

I saw BORN INNOCENT!! And it was SOME movie! It came complete with a warning that young people shouldn't see it and yet more than two-thirds of its cast was under 18! If it had been a theatrical release submitted to the MPAA, it would at least have been a PG. maybe an R. There was one creepy scene where Linda was completely nude and assaulted by the other girls. Only her arms protected them from the censor! The language contained a few things never heard on TV and the implications were as graphic as a real picture! It was powerful, all right. It made me furious to again see the terrible things done to people when supposedly someone is trying to HELP them. I mean, in the end, instead of getting better, she ended up as bad as the rest. Even smoking! Maybe she doesn't smoke much. They only showed her for a minute. I sure ope she's not a smoker. The TV messed up about halfway through but I was quick to get to mine. Black and white was better than nothing. If BORN INNOCENT doesn't garner at least one Emmy Award for Linda, I'll know something's crooked!  Wow. What an evening! 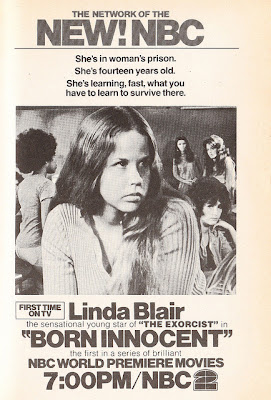 This was the first episode of BARNABY JONES' 3rd season. Jones was the "elderly" detective during the period when every detective show had to have some way to pigeonhole it.  Buddy Ebsen played the role.

Don't get me started on that Gym teacher. Things got worse before they...come to think of it, they never got better until I didn't have to deal with him anymore and I had him for two years!!

BORN INNOCENT. It really was a good movie but it was relentlessly dark and its controversy over the plunger rape scene overshadowed it. As I understand it, the only network rerun, which aired only out of prime time, was edited. Never saw it and haven't seen the film since.


She would be better served by her next TV movie, SARAH T, PORTRAIT OF A TEENAGE ALCOHOLIC.

Turned out Linda really did smoke and the fan mags started running oics of her with cigarettes soon afterwards.

I am Rodrigo and I write from Brazil...
I found this blog after seeing the image above_the classic BORN INNOCENT!
I confess I adore this film; besides being SHOCKING/CONTROVERSIAL/BAD (and SAD) END as well.
I identify myself to CHRISTINE PARKER - when I was a chld/teenager too... I had situations she faced (bullying/wishes to pass away). And I confess that there is a scene in that film that influenced me (once I ran away from the school I hated when she met her brother in that bus station_a bad influence...lol!).
And I was born in 1974 2 - my parentes lived there in USA (CA); I almost was born there.
This year (1974) was very important (and great productions were made_THE TOWERING INFERNO/EARTHQUAKE/DAISY MILLER); I think you are forgetting the classic ALICE DOESN´T LIVE HERE ANYMORE - which was released in the same day I was born (December 9th).
That´s it.

NBC made a big deal out of this "shocking" movie, but played right to type, casting that 'poor girl' who was abused in The Exorcist in this seedy pot-boiler. They would try again in Sarah T, but the public was growing bored with Linda's one note career. Sorry, Steve.

Was almost gonna finally watch Born Innocent, but wasn't satisfied with the quality copy I had. And it's too late in the morning and a "school night" for something this intense...

..so i watched the Barnaby Jones you watched..."A Gathering of Thieves" with Robert Foxworth, Tyne Daly and Laraine Stephens (I confuse her with Anne Francis a lot). (Not Barnaby's best...)