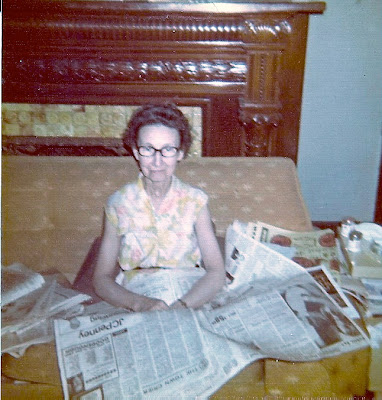 I made it through school. Didn't have to read much of the sex chapter aloud because my cough and sore throat are still so bad. I may have to stay home tomorrow and go to the doctor. We were supposed to go to the ballgame tonight but since I was sick, Mom gave the tickets to Agnes.

NOTES: Agnes was my mother's friend from work and her perpetual ride to and from work also. It was Agnes who came to the house one day when I was three and told my mother that they wanted her back at the factory where she had worked before getting pregnant with me. I wasn't thrilled. LOUDLY I wasn't thrilled! But after throwing as much guilt on her as I was capable of throwing, she returned to work. Agnes came by every morning for years after that and beeped her car horn for my Mom to come out. It became a running gag that whenever my Mom, my Dad or I heard a car horn, one of us would say, "Better hurry, There's Agnes." My Dad and I still did that long after my Mom passed in 1981!


Pictured is my mother in the early seventies, possibly from '74. She rarely smiled for pictures because she had genetically poor teeth but sometimes I could get her to grin a little as here.