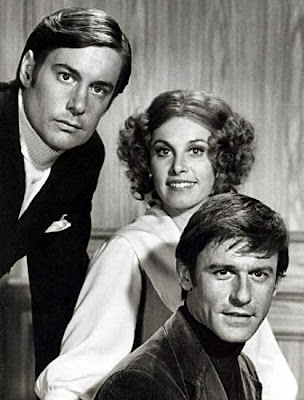 I got 3 books with facts and pix of Linda and Roddy including the ever-awkward CASTLE OF FRANKENSTEIN. I also saw Roddy and Steffie in TOPPER RETURNS again.

Terry and his friend Dwight whom I met today plan to make a movie and they want me involved, also. We spent a couple of hours looking at material for research. We'll have to wait for Terry to get a movie camera, though.

Mrs. Pritchett brought her grandbaby down again. I gave her one of my stuffed rabbits.


Dwight was the friend we wrote of in the '76 Journal. He would die from accidental drowning in just a couple of years. We never did make any movie.


TOPPER RETURNS was actually a surprisingly lackluster pilot carried only by star power. It was based on the old TV series about ghosts starring Leo G. Carroll from the fifties which had, in turn, been inspired by three movies of the thirties, the first of which had starred Cary Grant. In this case, Roddy played the nephew of the original Topper, haunted by his Uncle's ghost friends.


Stefanie Powers wrote me a letter at one point. I had asked her what it was like to work with Roddy McDowall as it seemed she had been appearing with him a lot at that point in various projects and she said, "I adore Roddy McDowall!"
Posted by Booksteve at 1:00 AM